History in the Making!

— Inside Our Stone Home — 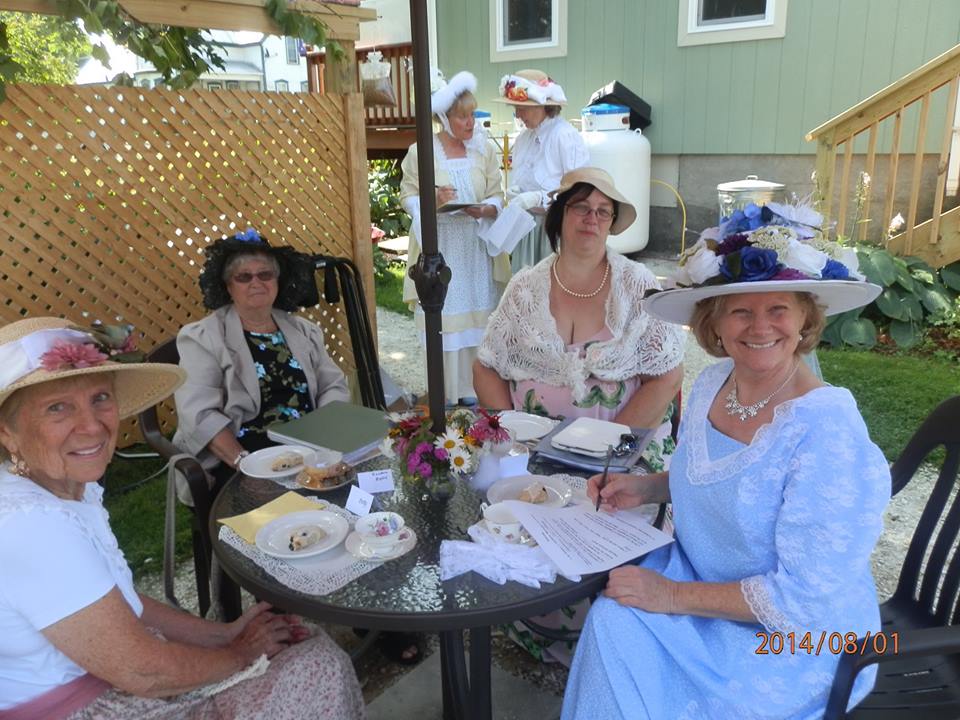 The Robbie Burns Supper was held on February 1st at the Hammond Presbyterian Church, which seemed to be a very enjoyable evening for all who attended.  The dinner was held to remember the life of Scottish poet, Robert Burns.  Over 50 guests from as far away as Ogdensburg and Watertown were served a 6 course meal as they were entertained throughout the evening.
Scottish Festival Co-Chairman, Karlyen Manke, welcomed everyone and gave Mr. Burns’ “Selkirk Grace” with a lovely Scottish brogue.  The guests were then able to enjoy the first course, tossed salad, while five members of HUG’s (Hammond Ukulele Group) played and sang “Comin’ Thro the Rye”.
For the second course, Scotch eggs were served. (For readers who may not be familiar with Scotch eggs, they are hard-boiled eggs, wrapped in sausage meat, rolled in breadcrumbs, & deep fried.)  As guests were enjoying this tasty treat, Rob Miller, the Burns Supper coordinator extraordinaire from Prescott, Ontario, paraded around the room, playing his bagpipes, followed by the porter, Hugh Quarrier.  Rob gave a very dramatic and entertaining “Address to a Haggis”, which totally captivated the audience.
Ted Elk gave a lively “Toast to the Lassies” while folks were eating their third course, cock-a-leekie soup.  Then very small scoops of haggis were served as the fourth course.  (In Burns’ day, haggis was a common dish of the poor as it was very cheap, being made from sheep parts that would normally be discarded, along with oats, suet & spices. The casing was usually made of  the animal’s stomach.)  Several guests tasted the haggis, but left the rest on their plates, while a few diners actually had seconds!  At this time, Dot Weber gave “The Lassies’ Reply”, noting many of Robbie Burns’ lovers and included a very interesting story of when her own grandparents, mother & aunt came over from Scotland in 1913, exactly one year after the Titanic sank.
The fifth course was the main one, which consisted of a very tasty Highland venison stew, tatties (potatoes), and neeps (turnips). During this main course Donna Demick shared her poem about the Burns Festivals held in Rossie, NY from 1859 to the early 1900’s, which were usually hosted by Jack Laidlaw and always held on the anniversary of the birthday of Robbie Burns, January 25th.  Mark Scarlett also shared a witty poem he had written as an invitation to a 1984 Burns Supper in Macomb, NY.
A good Scottish meal is not complete without dessert. The sixth course, Raspberry Cranachan, was the dessert of choice, which is a trifle with whipped cream, toasted oats & berries as the main ingredients and maybe a touch of whiskey. .A yummy shortbread cookie was served on the side. While enjoying dessert, Rob Miller gave some interesting facts about bagpipes.  Then he took requests from the audience for Scottish tunes which he played beautifully on both the small and large bagpipes.